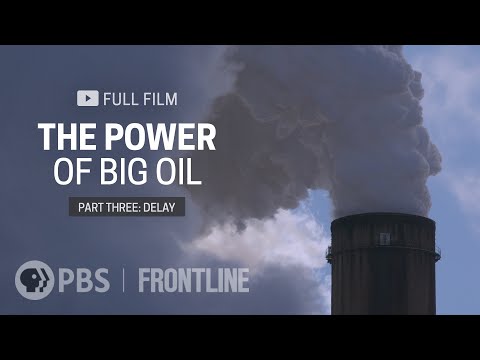 Watch the final episode of “The Power of Big Oil,” a three-part FRONTLINE docuseries investigating what scientists, corporations and politicians have known about human-caused climate change for decades — and the missed opportunities to mitigate the problem.

Throughout the first two episodes of “The Power of Big Oil,” FRONTLINE went inside the fossil fuel industry’s efforts in the 1980s, 1990s and 2000s to stall action on climate change by cultivating denial and doubt.

The third and final episode of the series brings the story up to the present.

“Delay,” part three of “The Power of Big Oil,” investigates how, even as the warnings about climate change grew, the U.S. reemerged as one of the world’s biggest oil and gas producers, and the fossil fuel industry worked to delay the transition to renewable energy sources — including by promoting natural gas as a cleaner alternative. But as the country was entering a gas boom, a former Exxon Mobil engineer tells FRONTLINE that the industry wasn’t monitoring for methane leaks that could turbo-charge the climate crisis.

As it brings the Big Oil series to a close, “Delay” unpacks the Obama, Trump and Biden administrations’ actions on climate change; explores what may happen next; and examines what’s at stake.

“The Power of Big Oil” is a FRONTLINE Production with Mongoose Pictures in association with BBC and Arte. The series producer is Dan Edge. The producer and director of episode 3 is Robin Barnwell. The editorial consultant is Russell Gold. The senior producers are James Jacoby and Eamonn Matthews. The executive producer for FRONTLINE is Raney Aronson-Rath.

Love FRONTLINE? Find us on the PBS Video App, where there are more than 300 FRONTLINE documentaries available to watch any time: https://to.pbs.org/FLVideoApp