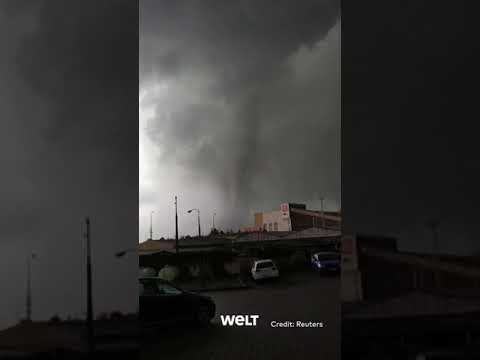 A rare tornado struck along the Czech Republic’s southern border on Thursday (June 24) evening, destroying parts of some towns as strong storms swept through the area and injured at least 150 people, emergency services and media reported.

A Czech Television meteorologist said the tornado, reported in towns around Hodonin, along the Austrian border and 270 km (167 miles) southeast of Prague, may have reached F3-F4 levels, with winds hitting 267-322 km per hour in the latter level.

That would make it the strongest in the central European country’s modern history and the first tornado since 2018.

Photos on social media and news websites showed houses and some churches with destroyed roofs, broken windows, and fallen trees and destroyed cars along streets after the storms hit.

A spokesperson for the South Moravia region’s ambulance service told CTK news agency up to 150 people were injured.

Czech TV reported around seven small towns were "massively" damaged, citing an emergency services spokesperson. An official of one municipality, Hrusky, said half of the town was practically levelled to the ground.

Interior Minister Jan Hamacek wrote on Twitter the situation in the area was serious and all emergency services units were at work. Search and rescue teams were also headed to the towns.