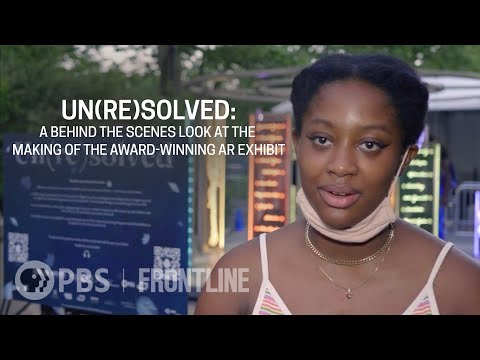 For the past year, the art installation portion of the Un(re)solved initiative has been traveling to cities across the United States. Visit https://www.pbs.org/wgbh/frontline/unresolved/installation to learn more and to see if the exhibit is coming to a town near you so you can have the experience yourself.

“Anyone can read about something tragic that happened to somebody, but you automatically become this much closer to them when you have to say their name out loud. They become a much more real person to you; their experience becomes rooted in your own reality.”

Un(re)solved is a major initiative that draws upon more than two years of reporting, thousands of documents and dozens of first-hand interviews. The multiplatform investigation tells the stories of lives cut short, and examines a federal effort to grapple with America’s legacy of racist killings through the Emmett Till Unsolved Civil Rights Crime Act.

To lead the creative vision for the interactive and installation, FRONTLINE partnered with Ado Ato Pictures, a premier mixed reality studio founded by artist, filmmaker and technologist Tamara Shogaolu. Shogaolu rooted the visuals of Un(re)solved in the powerful symbolism of trees. “I was really inspired by looking at the role of the tree as a symbol in American history,” Shogaolu said. “It’s been looked at as a symbol of freedom, we look at it as a connector between generations, and also there’s the association of trees with racial terror.” By turning the forests depicted throughout Un(re)solved into beautiful spaces, the artists sought to reclaim them for African Americans and to honor the victims.
Shogaolu was also inspired by the African American tradition of quilting. Among enslaved African Americans forbidden to read or write, quilts provided an important space to document family stories. Today, quilting remains a creative outlet rich with story and tradition. The artwork in Un(re)solved weaves in textures, motifs and patterns to create a quilt that the stories live within.
In the interactive, the stories are brought to life in part through impressionistic animations rooted in archival source materials. Shogaolu says this is a technique she uses in her artwork to help audiences remember that both the people and events in her stories are real. For Un(re)solved, the archival photos are transformed into colorful illustrations, given texture and layered with other imagery. For black and white images when colors were known, the artists tried to fairly represent them.
Subscribe on YouTube:
http://bit.ly/1BycsJW
Instagram:
https://www.instagram.com/frontlinepbs
https://www.instagram.com/un_re_solved/
Twitter:
Tweets by frontlinepbs
Facebook:
https://www.facebook.com/frontline